How the Elf and I Saved Christmas 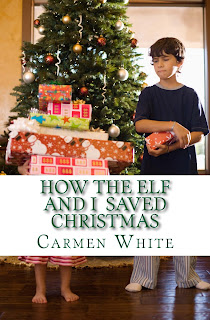 When Marie goes to the North Pole for her family's yearly Christmas vacation, she finds that something is terribly wrong. Presents aren't allowed this year and it's up to her, her sister, and a rebel elf to return the three gifts of Christmas before time runs out.

“It's not Christmas!”
My dad just kept walking. I slid on my heels, contemplating stepping on his toes if he did not let go of me.
Dad turned, his face drawn and impatient as ever. “Of course not, Marie—it's Christmas Eve.” He spoke in the same tone of voice that he used on clients over the telephone when he was trying to get their money.
“Come on,” he said, letting go of my wrist and prodding me forward.
I felt like I was in a bad dream. Here we were, at the North Pole, like every other Christmas Eve of my life. We made this trip once a year with hundreds of others; there's nothing like seeing the real North Pole to brighten the season with real Christmas magic. I loved the bright colors, the music, and of course, the elves. The elves always caused me to stare in wonder, no matter how often I saw them. This trip should have been even better, since my dad finally got to come with us. But it wasn't. Something was different.
Something was wrong.
The elves were not dressed in their bright reds, greens, blues, and silvers. Instead, they all wore uniform shirts, dull red, with 'Happy Holidays' written on a little green patch over the left shoulder. The air didn't sparkle with magic, and I could barely hear the music over the…
The realization of what was so different at the North Pole this year hit me like a rock, making me freeze cold—there was yelling and arguing. It was coming mostly from the parents, who were looking at the price lists of toys and gifts, then shaking their heads and dragging their crying children away.
That wasn't right! Everyone came to The Pole for fun, not shopping, and certainly not arguing!
I closed my eyes, trying to block it all out. Somehow, as long as my eyes stayed tightly shut, I could clearly remember the wonderful colors and bright lights of last year's Christmas. I could remember the elves talking in their happy, lightly accented voices; voices that made me think that if snow could talk, that’s what it would sound like. I remembered the toys, the music, the brightly-colored wrapping paper.
The wrapping machine was always my favorite. It was huge, with sparkling glass around each side. Colored wrapping paper peeked out of the glass windows in fantastic designs. It would spin like a top, flinging paper in every direction. Each piece of wrapping would fold itself right onto presents as they were handed out to anyone who passed by. It was magical—the sound, the smells… everything that was truly Christmas.
As soon as I opened my eyes, the vision was gone. In its place was the biggest shopping mall I had ever seen, with as much feeling and fun as a hardware store.
Ann stepped up beside me. “Look at all the toys!” she said, running to a shelf full of stuffed animals and gathering them in armloads.
Father frowned. “Not so many. They cost too much.”
Ann's face scrunched up in a confused frown. “What do you mean? It's Christmas!”
“But the rules have changed,” a voice spoke behind her. An elf boy stood there, his hands clasped behind his back. Elves were never the short, bearded guys you see in picture books; those were just silly pictures they drew to make us giggle. Elves actually look a lot like children, or sometimes teenagers. This one was probably a hundred years old, but he looked like he was twelve. At least, he would have looked like he was twelve if he hadn't been so somber, frowning at us the way he was.
“Everyone must buy their presents this year,” he said.
Ann looked down at her armful of toys. “...no gifts?”
The elf shook his head with a stern frown. “No gifts. We make them, you buy them.”
Ann looked close to tears. My nightmare was real. Sure, I'd heard that things were going to be a little different this year, but no presents from Santa?!
Father put a hand on Ann's shoulders, reaching around her and putting all the toys back on the metal shelves. “I'll buy you something, Ann. Don't worry.”
Ann sniffled.
“Ho! Ho! Ho!” someone laughed behind us. “Happy Holidays! One and all!”
I turned, my hope rising. Santa would fix it all! He would make Christmas back the way it was!
Whomever I saw, he wasn't Santa. He was big, white haired, and wore a beard; however, he wasn't especially jolly, even though he was smiling.
“Welcome to the North Pole!” he said. “What would you like to buy? Why waste time getting gifts? Buy something you like for yourself! It saves time, and if you buy tonight, you will save up to 20% off your purchase next year. Ho! Ho! Ho!” he laughed again.
Ann looked like she might scream, but whether from rage or fright, I couldn't tell.
Father greeted the new “Mr. Holiday.” Mom stepped up beside them and Mr. Holiday shook her hand. He ignored us, so Ann and I gratefully slipped away.


Buy from Barns and Noble

Amanda and the Goblins--Rough draft

My Mother is a Supervillain--draft infinity