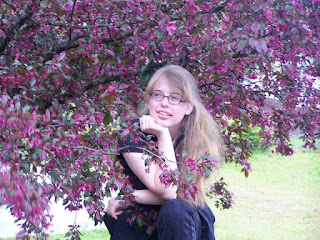 Carmen White is a writer who spent her childhood falling off horses and raising baby goats.
Carmen studied Creative Writing At BYU-Idaho and writes books about her many adventures—be it real life or imaginary.
She now lives in North Carolina where she’s raising two more outdoor loving/bookworm hybrids just like herself.

A ghost becomes frightened when he finds himself haunted by a living girl. Her presence may become permanent if he can’t overcome his own fear and help her through hers to get her back home.

Posted by Carmen at 6:13 PM No comments:

Have you ever really, really, REALLY disagreed with someone? Maybe it was a friend who took your stuff without asking, a sibling who broke your favorite thing, parents who wouldn’t let you do something you wanted to do… Writers have characters like that too! One character wants to do one thing, the other wants to do something different. Or maybe one character is trying to save the world while the other is trying to destroy it. When you write a story, you have to keep both views in mind. You might not agree with something, but someone in your story might.

So, for this writing activity, think about a situation you’ve been in where you have disagreed with someone, and then write about it. But instead of writing about why YOU were right and they were wrong, write about WHY that other person was saying what they were saying. Pretend that you agree with them and write from their point of view. What does this person care about? What do they want? Why do they want that thing, or think that way?

Posted by Carmen at 6:11 PM No comments:

Do you like Superheroes? Wizards? Magic? I’m writing a superhero story right now, and the tough part seems to be the powers.  I mean there’s so many powers to choose from! How do you choose one? And even more importantly, how do you choose one that hasn’t been done a million times? Here’s one of the ways I do it.

And now, just when you’re worn out, list one final idea for a power number 11

write about this new hero with this amazing power!

Posted by Carmen at 6:10 PM No comments:

Dragons are the most amazing things ever. I love reading about them, writing about them, finding pictures of them, drawing them, naming websites after them…

Okay, so I think it’s pretty clear that Dragons are cool. And this particular writing activity is all about them. You see, since dragons have been around for such a long time, we get these ideas about them from all the stuff we’ve read and seen, and sometimes that can make it hard to write our very own unique character.

For example, we all know that dragons breathe fire.

But what if our dragon could breathe something else? Occasionally we get an ice breathing dragon, or lightening breathing dragons. I have a note down somewhere to write about a dragon that breathes out poofs of dust, which is rather inconvenient since he lives in a very clean, fancy hotel.

How did I go from fire breathing dragons to one that breathes dust bunnies? Well, I made a list. I wrote down all the things that dragons might breathe, fire, ice, flowers. . .Wait what?

The longer you make your list, the more you make yourself really think. You start running out of the every-day options and instead have to get creative and think outside the box.

So, write down 10 things your dragon might breathe, then try to think of just one more and see what you come up with!

You can tell me some of your strangest ideas in the comments if you want.

Posted by Carmen at 6:09 PM No comments:

Hello friends! Today I’d like to introduce a new writing game, and talk a little bit about viewpoint.

A viewpoint is all about who’s eyes you are seeing the world from. As writers, we explore a lot of different viewpoints, many very different from our own. That’s part of the fun when it comes to writing your story!

Think about your favorite books or movies. Chances are, you like a certain genre or type of story; action, adventure, comedy… And one type of story might have a lot in common with other stories in it’s genre, such as car chases, bad guys, misunderstandings, or other fun shenanigans.  but the difference between each story has to do with viewpoint. We like or dislike various characters because of the way they behave and the way they interact with the world.

One of the best examples of how a viewpoint can change is an old writing activity where you have a character come into a room and see a glass of water.

What do they think of it?

What do they do?

Among my characters, Daniel would wonder if it’s really water and if it’s going to explode in his face. (He’s not the most trusting person in the world, considering he HAS had water explode in his face before.) His friend, Tights on the other hand would probably just drink the thing. She’s often busy saving the world, and thus very thirsty. Daniel’s mom would try to make the cup explode, and our friendly neighborhood superhero would likely go dump the water in a plant or something equally noble.

Same cup of water, but very different reactions from the various people because they all have unique experiences and desires that make them react and see things differently from one another.

And at the heart of it, that’s what viewpoint is all about!

You can download the new, awesome viewpoint writing game below. Where players are given one event or object, and then each player gets a different viewpoint to write it from. In this case, various animals. (Who doesn’t love animals?)  Hopefully you find it enjoyable, I did my best. But the creativity that makes a story worthwhile, is all up to you.

Posted by Carmen at 6:08 PM No comments:

Pretend you have a huge house. In your house, there are 11 rooms. Without repeating any, (you can only have one bedroom) list what each room is for. You might have a kitchen, bathroom. dining room etc.… But what comes after all those normal rooms? What do you have? A bug room where you farm cockroaches? (Please no!) Or a room dedicated to toy trains. Maybe you have a candy making room, a fairy garden room, or like Daniel, in my current project, an evil villain lab full of ridiculous inventions.

This activity is all about being creative. When you force yourself to think a little harder about things, you can come up with ideas you have never thought of before. This is a great writing skill to develop!  Because even if you write something set in a ‘normal’ place and time, the special attention and thought you put into little details is what makes your own writing unique from anyone else’s.

So, write about 11 rooms in your huge house. What are they for? What do they look like? What’s in them?

Posted by Carmen at 6:05 PM No comments: